Aliwal Shoal itself is a reef created out of fossilised sandstone almost 80 000 years ago. The area around the shoal consisted of sand dunes and, with heavy rains, the sand and shale dissolved forming a compound of calcium carbonate, which today forms the main body of the shoal.

With the shifting of the continental shelf, approximately 6 500 years ago, the sea level rose causing the flooding of the dunes. Over the years with the continual deposits of sand, sea shells and other reef building materials, a large and elaborate structure was created which today is known today as Aliwal Shoal.

Aliwal is about 2½ km’s long with a width averaging 150 meters. Depths very from 6 to 27 meters (19 to 88 ft) and the shoal offers a tapestry of diversity. The Cathedral area of the reef is one of the more spectacular dives. Its inhabitants include the Ragged Tooth Shark, Loggerhead Turtle and Ribbon Tailed Rays. 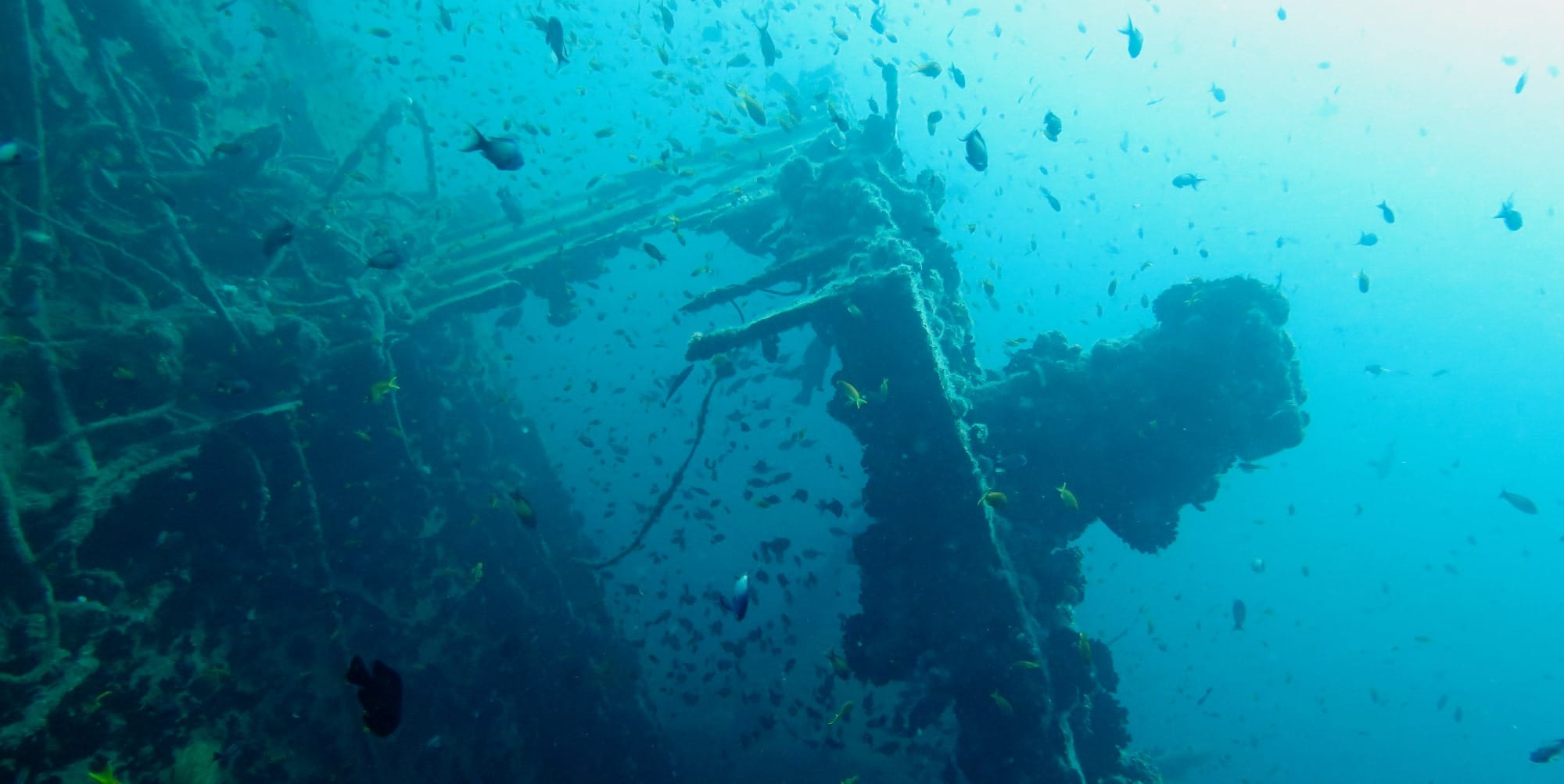 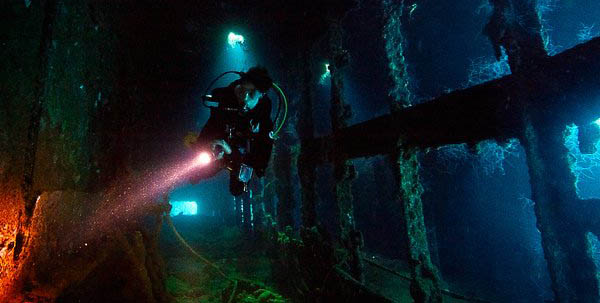 50 kms (31 Miles) south of Durban lies Umkomaas, on the banks of the  Mkomazi River. (uMkhomazi means the place of the Cow Whales) due to the large  numbers of whales which once used the estuary of the river as a nursery, giving  birth in the shallows and lolling around in the warm waters.

The Aliwal Shoal is situated 5kms (3 miles) off the village of  Umkomaas.

Some divers who regularly dive Aliwal say the dive is second only to the  boat ride through the breaking surf to get to the shoal, some divers use up all  their air on the ride out - before they even enter the  water!

Depths very from 6 to 27 meters (19 to 88 ft) and offer a tapestry of  diversity. The Cathedral area of the reef is one of the more spectacular dives.  Its inhabitants include the Ragged Tooth Shark, Loggerhead Turtle and Ribbon  Tailed Rays.

For the more daring diver the reef sports a landmark of international  importance - Raggie Cave - one of three locations on the reef famed for its  shark diving; the other two being Cathedral and Shark Gully. From July to  December the Shoal is the congregation point for Ragged Tooth Sharks, where up  to 60 sharks have been encountered at ant one time.

In the history of diving the Shoal there has been no recorded incidence  of aggression or attack between the thousands of sharks and the hundreds of  divers frequenting the reef.

The Aliwal Shoal is not just a vivid pageant of marine life but it is  also the final resting-place of two unfortunate ships, which were once ripped  asunder by the upper reaches of the reef. The Produce (1974), once a 2000 ton bulk  carrier, lies on the sandy bottom at 30 meters (100 ft) and its rusted framework  has formed an established reef, home to many species of fish, including 20 tame Brindle Bass. The Nebo which sank on  its maiden voyage in 1884 lies at 25 meters (82  ft).

The Aliwal Shoal is like a magnet, inextricably drawing countless ocean species into its realm - now it extends the same invitation to  you. 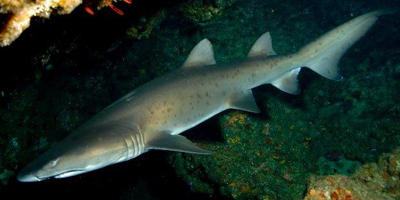 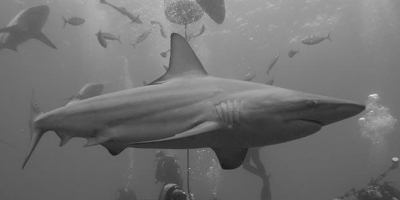 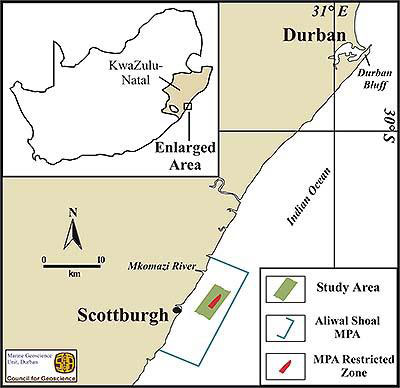 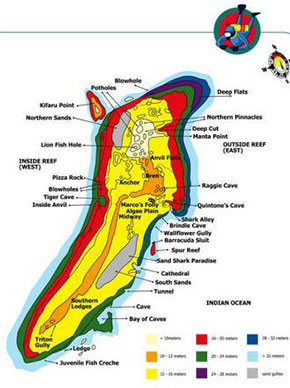 Some of the marine life on Aliwal Shoal can be seen all year round, while others can only be enjoyed during certain months. We cannot guarantee specific sighting, but the chances of seeing a particular species are very high during these months:

This area, together with Protea Banks, is the best-known and most popular dive destination in the country.

Dive sites are quite far from the shore 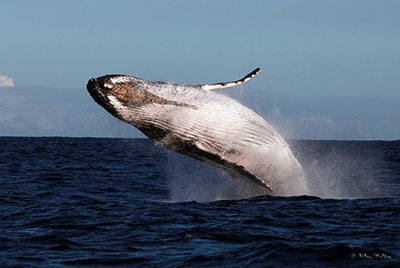 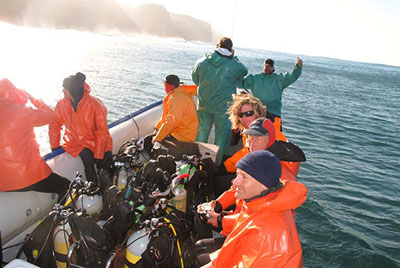 Diving is most dependable in the winter months from May to October. At this time, the visibility is good and the migratory spotted, ragged-tooth sharks are in residence.

Dive sites closer in shore are best dived in winter as the summer rain causes high run-off from many rivers.  The resulting low visibility is exacerbated from time to time by industrial effluent from the nearby SAICCOR pulp-processing plant.  Divers have nick-named this  scourge the ‘purple death’.

All diving in South Africa is best done early.  Firstly the “Raggies” are found in vast numbers on the reef but, as the day wears on, and the reefs are visited by more divers, the “Raggies” tend to move off.  Also, in the mornings, the wind and the seas tend to pick up causing a chop on the water and this makes for unpleasant diving.

The KwaZulu-Natal South Coast is an absolute pleasure for non-diving companions as it is a very well-developed tourist area catering mainly for  family holidays.

Shopping malls and restaurants - a major feature of the area

The Wild Coast Sun Casino - a short drive down the coast 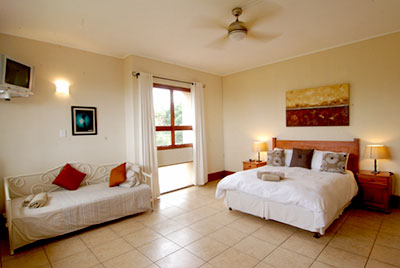 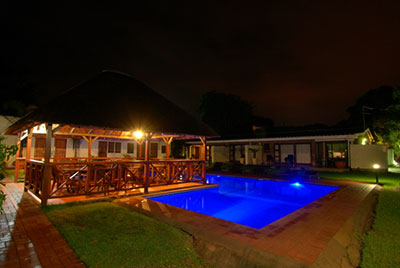