If you looking for the best diving site off the South African Coast, the coast of Kwa-Zulu Natal is blessed with the warm Agulhas current and a mere 8 km offshore is the diving hotspot, the Protea Banks.  This dive site ranks amongst the best in the world with indigo blue water and much pelagic fish.  This reef caters for a large variety of sharks, so if its sharks you after, this is the place to be.

The Protea Banks was a little unnoticed until recently, but today it ranks among the most popular diving sites in South Africa.  The reef is about 6km long and 800meter wide, starting at 28 meters but goes as deep as 45 meters in some places.  Protea Banks has a fast current so be prepared for a fast drift dive over the reef before heading down to the mid-water.  The sharks that frequent here change with the seasons, so different sharks can be found here at any given time.  Protea Banks is, however, famous for its Bull (Zambezi) sharks.  Diving in these currents and at this depth means that diving here requires you have an Advanced Certification with a minimum of 20 logged dives.

Diving Protea Banks in the summer months present the ultimate drift dives over the Southern Pinnacles where you will see an array of bull sharks, tiger sharks and hammerheads.  During the winter months, hundreds of ragged tooth sharks arrive at the Northern Pinnacles seeking shelter in many gullies, swim-throughs and caves from the current. 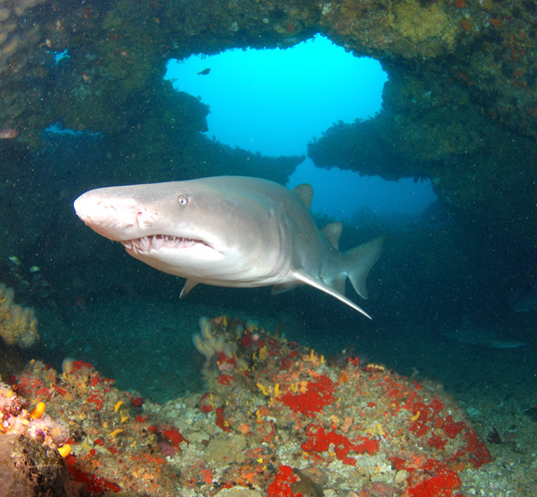 Protea Banks does not exclusively have sharks but actually sports a large variety of game fish too.  Typically found there are tuna, barracuda, kingfish bonito and many other species.  If you are lucky you will see brindle bass or even Potato Bass.  Eagle Rays, Round Ribbontail Rays and even the occasional Manta Ray make an appearance on Protea Banks.

If you happened to be diving Protea Banks from June to November you will perhaps have the privilege of seeing Humpback Whales on the boat ride to and from Protea Banks.  Humpback Whales migrate during these months from the Southern Pole to the warm Kwa-Zulu Natal coast so it is not uncommon to encounter these magnificent mammals while diving too.  Dolphins are also regularly sighted in this area.

Protea Banks also has a wide variety of reef fish which are often overlooked.  A delight on all dives is surely the Royal Angelfish recognised by their distinctive blue, yellow and black stripes.  Rarely seen, the “Old Woman” reef fish have been spotted at 5-30 meters.  Emperor Angelfish is on every photographer's list of must-have photos and they are seen from time to time.  Other reef species found here are Tiger Angelfish, Coral Beauty, Dusky Cherub Threespot Angelfish and a host of other small fish.

Explore the Protea Banks and all it has to offer by booking your dive with Dive the Big 5!