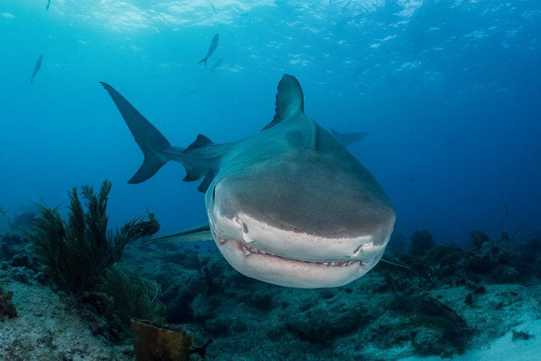 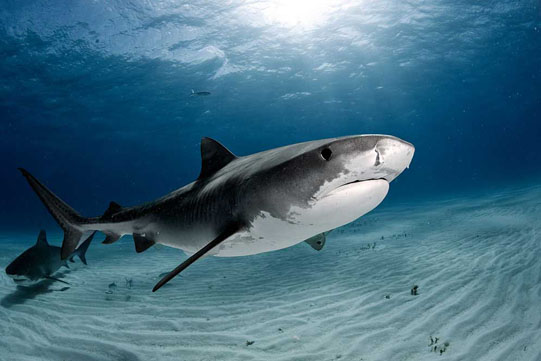 How Do We Dive With The Tigers?

Option one, which is not our preferred option, is to set up baits on the seabed at 15/17m and then observe the sharks as they come to the baits to feed. As many as 8 tigers at once may be expected but typically two or three are the norm at any one time. The animals tend to arrive around 09h00 and stay until the divers leave the site. The group of no more than 8 divers conducts either one or two dives. The most number of passes (a pass is measured to within 1 metre of the diver) in a single dive is 68 by Betty (a 4.5m female) in 2000.

The most number of continuous days without a tiger sighting whilst working on the bottom is five, although we had a White Shark, Hammerheads, Zambezi and Blacktips to take up the slack during this period.

Option two and the most recommended option is sub surface drifting. Over the last two years (2002/3), we started the surface work a la’ the Great White Shark cage diving, but without a cage, and it has been very successful, other than breaching we are getting all the other behavioural stuff that they get with the Great Whites.

Once we arrive at the dive site we start chumming so as to attract the Tigers and pot out a buoy with the bait. When the first Tigers appear the DM assesses the situation and if he is of the opinion that the Tigers are going to stay around awhile and that they are not aggressive the divers may enter the water. Either you can view the action from the “safety” of the boat, or for non-certified divers, on snorkel, and certified divers can drop down to about 5 meters and follow the action from below. This is a drift dive as the boat, chum and bait is drifting with the wind and surface current, as are the divers at 5 meters. Should the sharks disappear the snorkellers and divers climb back onto the boat and we move to another location and start all over again.

Typical visibility is from 5 to 40m and water temperature between 22 and 28 Celsius depending of the time of year. Daytime temperatures range from 20 to 38 Celsius.

This method has delivered 100% success over the past two years. 2003 offered the best animal interaction year so far. 17 sharks presented themselves. Made up of 3 males and 14 females. The biggest animal was a return female, Marion, at 4.0m (pcl). Barbara-Ann arrived back after a year’s absence and was a major player. One of the animals tagged in the 2002 acoustic study (Ashleigh 3.5m pcl) returned and was one of the nine regulars. The longest surface wait at one site was 40 min and the shortest wait was 7 min.

2004 delivered 20 identifiable animals and of these two were males. Ashleigh was back with Ella. Barbara Ann was around for a month and then disappeared and a host of new animals made themselves famous in dive logbooks and on the film circuit.

So far 2005 has continued with a 100% sighting success per day per dive. We have identified 18 sharks and new ones are entering the area on a weekly basis. One animal has returned from the 2004 tagging study and many new faces have been documented this year. 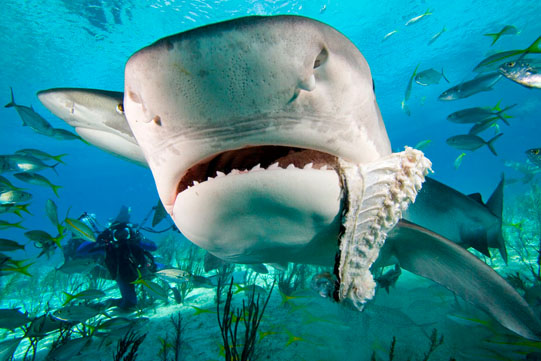 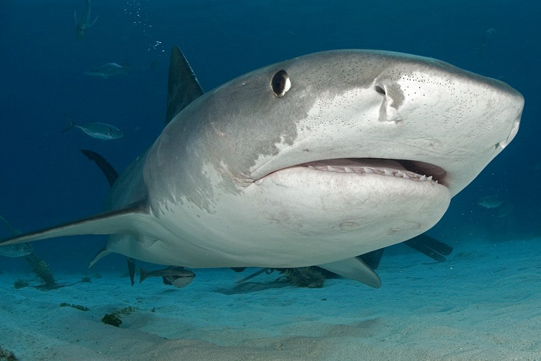 Coming face-to-face with a Tiger Shark is nothing like you've ever imagined... 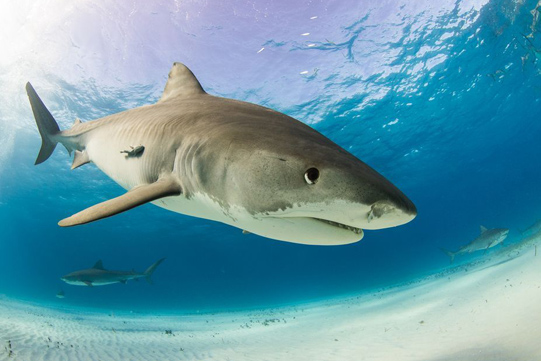